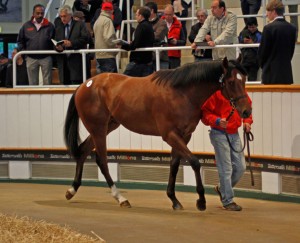 Europe’s breeze-up record price was nudged to a new high at Tattersalls in Newmarket last night when a son of High Chaparral made 800,000gns.

A horns-locked encounter between two major racing and breeding operations created the new mark – up 40,000gns on the previous best set at this same Craven Breeze-Up Sale last year – and the successful buyer proved to be Sheikh Joaan’s Al Shaqab Racing,  which foiled the powerhouse Coolmore Stud. It was a moment in time for the vendor, Jim McCartan of Gaybrook Lodge Stud, who picked up this prized possession for a humble 41,000gns (that is not a printing error!) in December.

Harry Herbert, representing the Sheikh, said of the colt, a grandson of the marvellous Hascombe and Valiant Stud’s mare Ingozi: “He has the most beautiful head and wonderful outlook. He was the absolute stand-out in this sale, and you could see the  opposition – they wanted him just as much.”

The revered colt had been foaled by the Pivotal mare Abunai, who produced a juvenile winner last year in Black Blade, and was herself a half-sister to Gr.1 E P Taylor Stakes heroine Miss Keller.

Two foot soldiers had been sent to bid on behalf of the leviathans, namely Ross Doyle for Al Shaqab, and Jamie McCalmont, who was positioned next to Paul Shanahan, Michael Tabor and M V Magnier, for Coolmore. Doyle, who was standing alongside Richard Hannon Jr, said the new European record holder put him in mind of another High Chaparral colt who is in that trainer’s stable.

“He reminds me of Toronado,” said Doyle. “He was the best horse here by a long way. He’s very special – they don’t just come along like that.”

Asked to confirm that Hannon, in his first season with a licence, would handle this exciting prospect, Herbert smiled and said: “One would assume so. There would be war if not.” 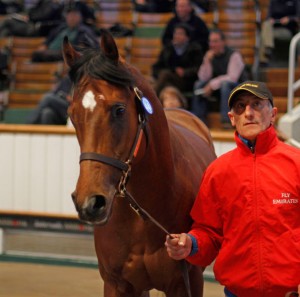 For seasoned observers, let alone the average racegoer who knows little of the machinations beneath the action they see on the track, the question is: How did a 41,000gns yearling, bought at the December Yearling Sale little more than five months ago, spiral so colossally in value?

“It’s a Westmeath thing,” said McCartan, in jest perhaps, but how can anyone be sure when such a remarkable transition has been achieved? “The day I bought him I thought he was very nice, and the first time I worked him I thought he was different – he just worked better than other horses. He did everything very easily, and when we came here he did the breeze I thought was in him.

“You have to bear in mind it’s very much a team thing. You cannot do this without good staff. Cian Hughes broke him in, Gerry Kerins has been riding him for the past couple of months, and Manuel breezed him. The lads at home were all mad about him.”

Asked what he would do with his bumper profit, McCartan added: “The bank manager will be happier, and it will help pay for the equine swimming pool. Willie Browne just came up and said I’ll be swimming them in champagne after this!”

Gaybrook Lodge’s spectacular moment was given a cream topping later in the session when it traded an Invincible Spirit filly (Lot 65) to Dick O’Gorman for 210,000gns – described by auctioneer Edmond Mahony as “An Ascot two-year-old”, she had been bought my Midas-touch McCartan for 25,000gns at the October Sale.

Of course, such profitable occasions have to be set against the inevitable losses that will occur – McCartan revealed he is trading 30 breezers this season at the two Tattersalls’ sales, DBS, Arqana and Goresbridge, and, intriguingly, he has a War Front filly for Goffs’ new London sale on the Monday of Royal Ascot, where she will be one of 30 two-year-olds who will be auctioned (in addition to a possible 20 horses in training). “It’s something new and imaginative, and we wanted to support it,” said McCartan.