If an example of the success, fun and durability that a breeze-up horse can offer was ever needed, then look no further than Gaybrook Lodge Stud graduate THUNDERING BLUE. 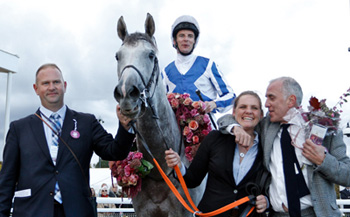 In a season last year for trainer David Menuisier that comprised nine starts in four different countries, Clive Washbourn’s immensely popular grey captured the Group 2 Skybet York Stakes before heading to Sweden, where he won the Group 3 Stockholm Cup International. However, his best performance arguably came when he ran in the Group 1 Juddmonte International, with Group 1 winners Saxon Warrior, Benbatl, Without Parole, Latrobe and Thunder Snow all in arrears.

Not only that, Thundering Blue also travelled to Woodbine in Canada to run second in the Group 1 Canadian International.

Now the winner of six of 22 starts for £460,000 in earnings, Thundering Blue was bought by his connections for 190,000gns from Gaybrook Lodge Stud at the 2015 Tattersalls Craven Breeze-Up Sale.

Remarkably, he appears to be still thriving at the age of six and will be a popular choice to land a deserved Group 1 this season. 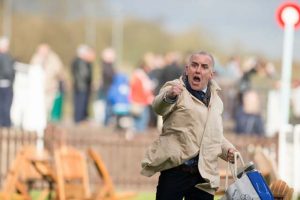 However, it’s not all about the exploits of those classy, older graduates at Gaybrook Lodge.

He leads the way among a group that is also highlighted by Listed winner Happy Odyssey, who sold for €300,000 to Yulong Investments/BBA Ireland following her win in the Prix Saraca, and Team Valor’s Sonja Henie, the taking winner of a Kempton maiden in November – the Racing Post were impressed, noting that the daughter of Exceed And Excel‘rates Pattern-class potential’.

Recent seasons have also yielded Ball Girl, a tough two-year-old for Qatar Racing who ran third behind U S Navy Flag in the Round Tower Stakes, and Phoenix Thoroughbreds’ Gotti, who was winning for his new connections just two months after his sale at Doncaster. A tough colt, he later ran second in the UAE 2,000 Guineas at Meydan.

Phoenix Thoroughbreds may now have yet another smart graduate on their hands in King Ademar, who signed off last season by running second in a good maiden at Newmarket. He holds entries in the Irish 2,000 Guineas and Dante Stakes for Martyn Meade.

Greater targets also surely beckon for Ibrahim Araci’s On The Line, a recent easy winner at Lingfield, and Greek Kodiac, who ran third against older horses in a Newmarket conditions event last autumn.

The highly rated pair Kings Shield and Jaylan (later placed in the Prix Vanteaux), Al Motasim and It’s Two O’Clock are other graduates of the past three seasons to have scored first time out at two, while Zyzzyva was classy enough to run third in the Prix des Chenes and recently made a successful four-year-old return at Chantilly.

Overall, the exploits of Thundering Blue and Happy Odyssey followed off the back of another successful sales season for Gaybrook Lodge Stud.

At the Tattersalls Craven Sale, a total of 902,000gns was turned over for five horses led by Bye Bye Hong Kong, who was knocked down to SackvilleDonald on behalf of King Power Racing for 575,000gns – a significant return on what he had cost as a Keeneland September yearling.

The promising King Ademar, meanwhile, led the way at Arqana’s May Sale when selling for €320,000 to Phoenix Thoroughbreds and Dermot Farrington.

Year after year, Gaybrook Lodge Stud has lived up to its reputation as a source of quality performers. You can be sure that another classy draft has been assembled for this year’s sales season and we welcome your interest.